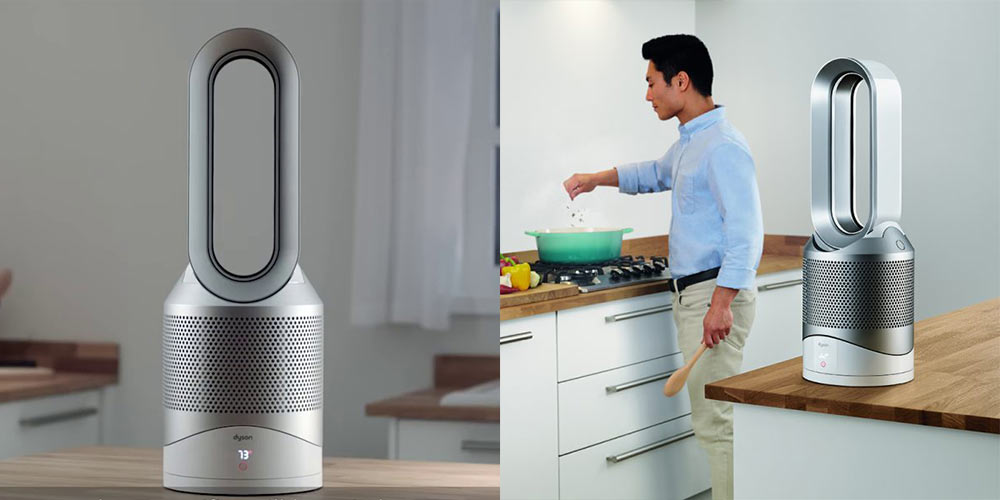 Comparing Dyson Hp02 and Hp04; Which One Is Better?

The Dyson company produces refined and remarkable household products. Their air purifiers are no less exceptional products. The air purifiers that have a relatively expensive price tag to them are a valuable addition to improve the air quality indoors. Dyson air purifiers serve quality and provide the necessary and other additional smart features that the customers love.

In this article, we will be discussing two of Dyson’s air purifiers, Dyson HP02 and Dyson HP04, and our comparison of Dyson HP02 vs. HP04 at the end will help you make the right decision by choosing either of these models.

If you wish to learn more about the Dyson air purifiers before moving further ahead, you can check our Dyson and the Dyson TP series articles.

Dyson HP01 is the first one in the HP series. It is an excellent product if you are not looking for all the technology updates made on the other models. It is conveniently cheaper than the HP02 and the HP04. You can check that product out here since, further down the article, we will be talking about the HP02 and HP04.

Dyson HP02 and HP04 are both powerful air purifiers. The HP02 model is packed with features that are up to date with the latest technology and fulfills the promise of being a great air purifier. When we think no more upgrades could be needed for this model, then all the additional features in the Dyson HP04.

If you are asking yourself the question: which one of them is better? The answer is obvious, the new and latest product in the series is the better choice: HP04 but of course, there are many specifications and things that need to be considered before you choose the right one for you. What works for others might not work for you.

So, let’s dive deeper into all the essential things that you can know about these two air purifiers, so making the right choice is much easier for you.

Is The Dyson HP02 Worth It?

Before we list the similarities and differences between the two air purifiers, we are here to answer a question that might be ringing in your head: why compare HP02 and HP04 if the latter is the obvious choice? Sure HP04 has better and upgraded features that make it the obvious choice, but most people still go for the Dyson HP02. That is because HP02 is powerful and has all those features that you need from an air purifier. Features that make the HP02 worth it.

Read on to the features to discover what makes both of them so unique. Considering all things, HP02 might be the product that you end up choosing.

The Dyson HP02 is a smart air purifier. You can call it a perfect air purifier. It has all the necessary features needed by an air purifier and all the upgraded technology and everyday stuff people love. But the downside? Dyson HP02 price. It can be expensive, with a price tag of $599.9. Let’s read on to see what makes this expensive air purifier worth it.

Dyson HP02 has a 360° sealed HEPA filter with a second layer of the activated carbon filter. The HEPA filter is a medically approved market standard for air purifiers that removes pollen, dust, dust mites, mold spores, and other contaminants as small as 0.3 microns. The layer of an activated carbon filter is efficient against all the odors, whether it be the strong kitchen doors, pet odor, or strong chemical odors that can be harmful.

HP02 is a smart, valuable air purifier to have. It cleans well for large rooms and is efficient, and all the intelligent features, including voice control, Dyson app, wifi, and LCD.

The HP02 is a complete all-rounder. It has a balanced mix of all the necessary features, along with the additional smart features. It is lightweight, which makes it easier to carry around and use in different places. It can be placed on the floor or either on the desk. In short, it is a cleaner that is easy to use and easy to maintain.

Dyson HP04 is an intelligent air purifier. It improves your lifestyle by upgrading your air quality effectively and by making clean air more accessible. It does not require any additional maintenance as compared to the other Dyson air purifiers. Again, the downside? The Dyson HP04 price. This air purifier comes with a hefty price tag of $649, but some features make it worth it.

All these features, plus the additional smart features, voice control, wifi, Dyson app, and night mode, makes this air purifier the right choice to buy.

The smart features. That is what is there to love about the Dyson HP04. The device will work efficiently to remove all the possible pollutants as fast as it can. It is easy to operate and maintain, but the upgraded technology gives this air purifier the edge.

Differences Between The Dyson HP02 And HP04

Even though both the products might come off as the same to you, they still have some differences that bring out a change in the devices’ performance.

The HP02 is just as wide as the HP04, but it is 24.9 inches tall, unlike the other model. The air purifier is oval-shaped, allowing it to consume less space than the TP or DP series. It is available in dark gray color.

HP04 has the same size and shape as the HP02 except for the height; this air purifier is taller with a height of 30.1 inches. It is also oval and has a gray-colored base, and the fan top is white.

It has a limited oscillation of 70°. This could be one of the only features that allow the HP04 to win over this model. It oscillates the clean air at 70°, which is enough to support large rooms, but it can cause the airflow to be slower.

The HP04 has better oscillation. It flows out the clean air at 350°. Such airflow allows the surrounding air to be cleaned a lot quicker. It is improving airflow by 60%.

Clearly, the HP04 has better oscillation as compared to the HP02.

The HP02 filters are the sealed glass HEPA filter and the activated carbon filter. Both filters are combined to form one filter in this air purifier. These filters are effective against all sorts of contaminants and odors that can be harmful and dangerous.

HP04 has two separate filters. It has a better and improved HEPA filter, whereas the activated carbon filter is more 3 x more active than the one in the HP02.

The updated filters in HP04 are more efficient.

The LCD in HP02 reports air quality, temperature, and wifi strength, which is a valuable addition missing in the previous model HP01.

The LCD in the Dyson HP04 is made even better. It has those features like the ones in the HP02 but along with it is the new feature that allows reporting about the humidity in the air. The types of pollutants or harmful gases present in your surrounding air are all reported to you by the LCD.

The new update to display humidity level gives this point to HP04.

The air multiplier technology in this air purifier utilizes its maximum airflow of 53 gallons by continuously flowing in the healthy and clean air.

The HP04 has better airflow and flows the clean air faster than the HP01 because this model has an airflow of 83 gallons.

Although CADR(clean air delivery rate) is not specified for these models, the HP04 has better airflow with its increased capacity.

It does not have the backward airflow feature, i.e., it does not purify without cooling or heating.

The HP04 has backward airflow that allows the machine to purify without cooling or heating.

These important and smart features put HP04 again in the lead.

Similarities Between The Dyson HP02 And HP04

There are a lot of similarities that are found in Dyson HP02 and HP04.

As we discussed already, both the air purifiers used HEPA and activated carbon filter that is effective and removes 99.97% dust mites, pollen, allergens, and strong and harmful odors, including VOCs.

Dyson HP02 and HP04 are equipped with air quality sensors that adjust the fan speed according to the pollutants present in the air around you.

Both HP02 and HP04 can purify, calm, and heat. These features make them useable and valuable all year long.

The focused jet airflow flows the air over the long-range with precision. It reduces the chances of leaving out cold spots while heating and vice versa.

The diffused mode allows the air purifiers to throw clean air over a wide range of space. They are covering all the holes in the surrounding area to improve the result of perspective for you.

Both of these two air purifiers have smart features that allow them to be controlled through remote control or voice control through Alexa. The air purifiers can also be connected to the Dyson app to monitor the air quality. There is also a night mode and sleep timer that is available in these air purifiers.

Dyson HP02 coverage and Dyson HP04 coverage is the real concern for most people. HP02 and HP04 both are made to purify large spaces. They can be used in large rooms, and they will work efficiently. They can also be placed in the center of your house’s airflow, such as the living room, kitchen, etc. Read more about putting the air purifier in the right position.

The HP02 and HP04 noise levels are like that of other air purifiers. They have a noise level of 47dB at the lowest fan speed, and the highest fan speed, the noise produced for HP02 can be up to 57dB whereas it is around 60-62 dB, which is the sound of a normal conversation, for HP04.

Which One Do We Recommend And Why?

Investing this much money into an air purifier can make you think the air purifiers are worth it. Still, it is essential to know that this investment proves to be worthwhile as per the reviews of various customers.

If you do not wish to spend too much and do not care about technology, you can even grab yourself an HP01 as it has some useful features. The better choice will be the HP02 with its smart features that make a remarkable difference, and the best option is the HP04.

Dyson HP04 covers all the features that are there in an air purifier. Its smart features add ease to your life and work well in the long term to improve your health. If you are going to make a real investment might as well invest in this product.

Choosing between two air purifiers from the same series almost the same can be hectic if you are trying to find the right answer. The truth is, making the right decision, and finding the correct answer is something that depends solely on your requirements.

However, we have given you our opinion regarding Dyson HP02 vs. HP04; we hope you have read this far until the article, you have decided on the air purifier you wish to buy.

Article Name
Comparing Dyson Hp02 and Hp04; Which One Is Better?
Description
Are Dyson’s HP02 filter better than the Dyson HP04 filter? What makes one better than the other? Find your answers in our detailed Dyson HP02 vs. HP04 review.
Author
Authur Jackson
Publisher Name
Home Ionizer
Publisher Logo