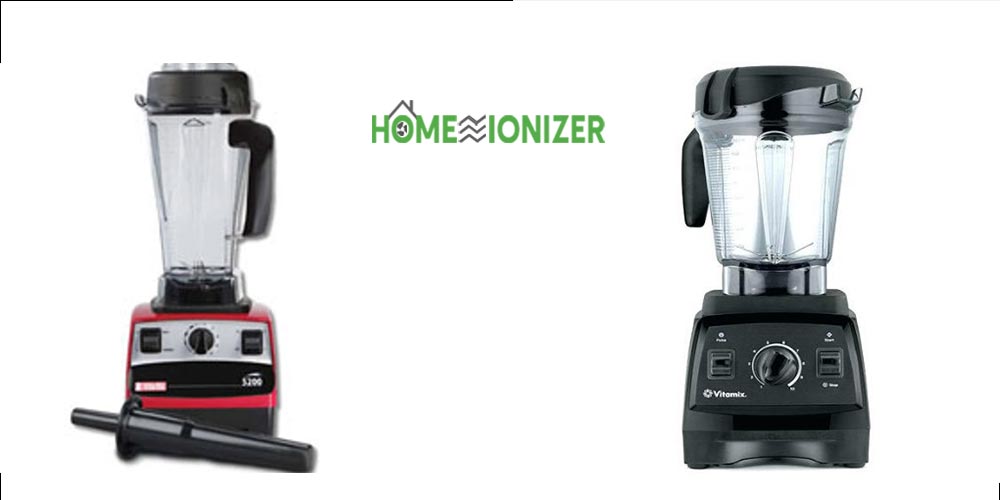 Vitamix E320 vs. 5200: Comparing the Similarities and Differences

Although there is more than a decade between the launch of both the products, they both have a classic 2.0 motor base. As mentioned, the model 5200 has inspired many Vitamix series, including the G-Series and the Explorian models. For this reason, you’ll notice the blender E320 is similar to its future comparison.

Both the devices have an identical base. As a result, the two machines have the classic style and basic physical controls. The design of the 5200 is a little too plain, with flat sides. This differentiates with the Explorian E320, which has a similar side curve to the Ascent series.

However, the curved angle is not exactly a lot different as it did not include the noise dampening technology we’d anticipate.

If you are a person who prefers fancy juicer designs, Vitamix isn’t a brand for you. The only bright finishes the company offers are white, and the rest of their products are metallic and professional looking.
The Vitamix E320 comes in only two finishes, black and Red. It doesn’t offer different colors or other metallic finishes.

The 5200 offered platinum and brushed stainless metallic finish give a higher resistance due to the liquid metal treatment. The 5200 also provides better color options that include Red, white, and black.

If you have a small kitchen space, this section of the article is worth noting for you. It all begins with the Vitamix 5200, which has the natural classic motor base and large container that the modern machines replicate.

Furthermore, the blender comes with a container that has a capacity of 64oz, and its base is 8.75 by 7.25 inches. The blender is quite tall, which takes space of approximately 20.5 inches. So, it’s a bit hard to fit it under regular 18-inch kitchen cabinets.

On the other hand, the Vitamix E320 has a 64oz pitcher that is shorter but wider in design. So because of its clever design, the blender is less extended than the 5200, saving up space, and is easier to fit under 18-inch kitchen cabinets.

However, the Explorian model has a slightly wider base [8 x 11 inches] that fits the container.

Both the Vitamix E320 and 5200 blenders come with different containers having the same 64oz capacity. They differ in design where the company got clever with the E320 giving it a shorter but broader look, saving space, while the 5200 is slim and tall that adds up some extra inches. The blending experience is different, but of course, the results are the same.

However, both the blenders are pretty good at their job, but If you prefer the Vitamix E5200 series and its tall and slim pitcher, you can also blend a small amount of food without messing. While the E320 is broader and shorter, so it may splash or make some mess, but that isn’t that big of a problem.

Vitamix E320 has a wide jar that doesn’t only save space but is easier to scoop as well. It has a broader base than a standard hand can fit easily, and cleaning sticky blends isn’t a worry anymore.

Whereas the full-size Vitamix blenders have the original container, which blends in such a way that creates a vortex. As a result, it delivers smoother texture and faster combinations.

Vitamix offers laser-cut stainless steel blades. The difference between the 5200 and E320 is that the E320 has a broader design, making the edge bigger.

The E320 has a broader base giving it a design that makes the contact of the solids easier with the blades. The blades are about 4-inches that is 1 inch longer than that of the 5200.

Because of the longer blades, the E320 makes more friction than the classic 5200, making it heat soup faster. The tall 5200 has a container that contains 3-inch blades in diameter.

Now you have read much about the Vitamix. But if you are also a coffee enthusiast, let’s go and check out the Difference Between the Keurig K50 and K55?

Above all, the E310 and 5200 give a long 7-years full warranty, two years longer than the E310. That certifies that the quality of both the machines is up to the mark. The Vitamix machines are so durable that the company quotes that only 0.5% of the devices get returned for warranty claims. The company also increased the warranty for its modern touch machines, the Ascent series of about ten years, and if you get a reconditioned engine, you get a 5-year warranty.

The Vitamix E320 was introduced in 2017. It’s part of the Explorian lineup, which includes the model E310 that also came during that time. Before releasing the Explorian line, Vitamix released its modern series Ascent with a touchscreen and wireless technology.

Comparatively, the Ascent models, though, the Vitamix E320 has a motor base similar to the classic [C-Series]hencebasic physical switches, and control panel. Other than that, they include a pulse feature that allows you to blend in short intervals.

Furthermore, The Vitamix E320 comes with a powerful 2.2 HP motor that is 10% more powerful than that of the E310. However, both blenders are great for tough blending, but they don’t offer automatic blending like modern blenders. 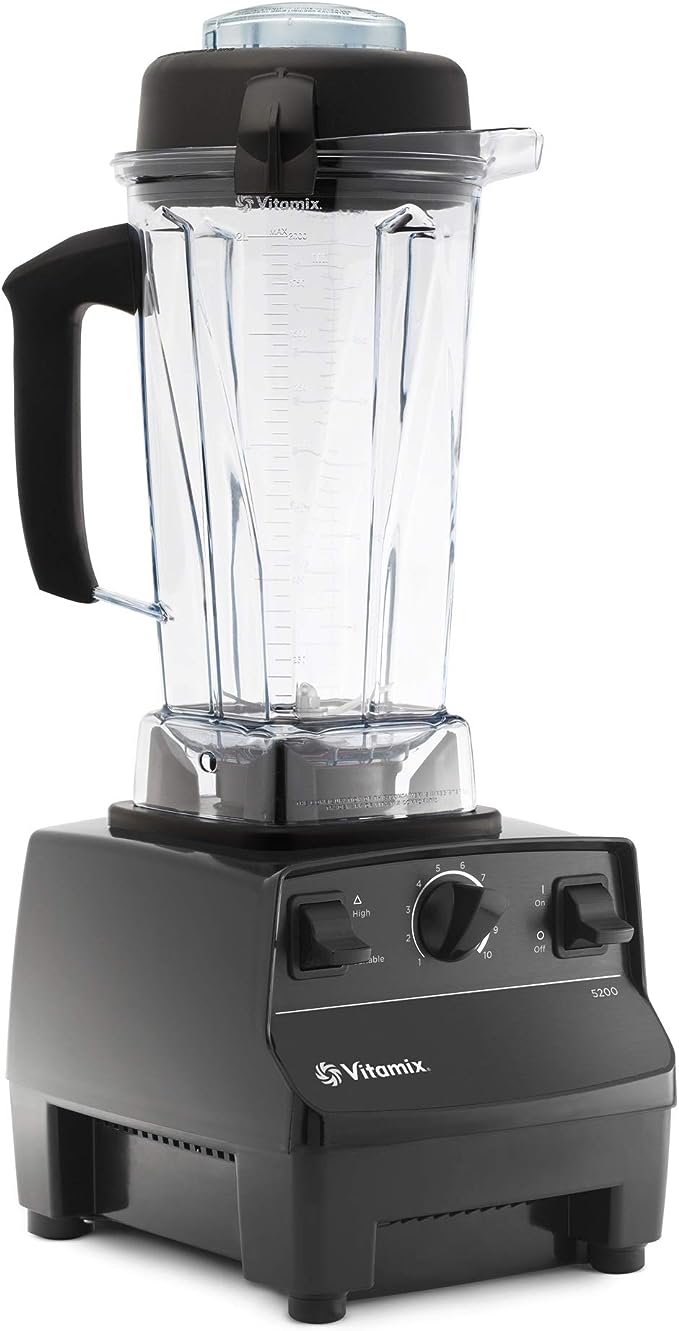 The flagship 5200 was released in 2007 that took over the classic 5000 series. Due to its challenging design and user-friendly interface is still on the store shelves even after a decade of its release. It has also inspired future generations of the blenders, including the Explorian series.
Moreover, the 5200 comes with a powerful motor and more giant blades that can quickly chop anything you add to it. The blenders also offer multiple speed settings that add up to a great blending.
Speaking of blending, this blender has the primary classic 64-ounce pitcher that can handle small to large batches without stress. More on that, continue reading the brief comparison review below.

Why not check out a detailed review of Vitamix 5200 before you move on to the comparison chart. Read on to know Vitamix 5200 Vs 5300 Which Is Better.

To summarize, the comparison between the Vitamix E320 vs.E5200 above mentions different features and similarities between the two. All the aspects elaborated in this article point out that the 5200 is old but still gives a good competition to the newer models.

It will be unfair to determine a winner as they both have a decade of difference between their launch. But if you must choose between the two, E320 is better as it comes with a lot of cool features and is cheaper. It is time to buy your E320 and enjoy a healthy life.

What’s the main difference between the Vitamix E320 and 5200?

The Vitamix E320 blender comes under the Explorian platform instead of the Vitamix 5200, which belongs to the C-Series. In addition, the E320 comes with a powerful motor, a pulse feature, and a sleek design, compared to the standard components on the 5200.

Will the Vitamix blenders work on 220v?

These blenders are made to work at 120V, but you might need an adapter if you want to make it work with 220v.

Do you get a cookbook with the Vitamix 5200?

How fast can the blades work on the blenders?